... with Lipizzani Conversano horses
Sightseeing and environmental routes through the local rural countryside

Brief historical outline
With the arrival of the Acquaviva d'Aragona family in Conversano, and specifically Giulio Antonio I in 1456, a prestigious race of horses, called the Conversano breed, developed. The hilly lands of these noblemen were suitable for raising and breeding horses. The horses were most likely raised near Alberobello, Noci and on the border with Martina Franca, and not near Conversano. Toward the end of the 1400s, the Conversano counts suddenly became not only the most famous breeders in the kingdom, but also the best trainers of both war horses and transport horses. At this time, all the regents of the Kingdom of Naples depended on the Conversano counts to defend the kingdom's lands, not only because they were horse experts, but also because they had a large number of horses at their disposal. In 1580, the Archduke of Austria Carlo II founded the famous stud farm at Lipizza, near Trieste, where he moved his horses, in particular those coming from the Kingdom of Naples. In the mid-1700s, Maria Teresa d'Austria officially named these horses Lipizzani. Their progenitor has been identified as the dark-coated Conversano horse. Returning to the present, the Minunni family, fascinated by the Lipizzani breed and its history, undertook a project years ago to restore the original morphological characteristics of the Conversano breed. To this end, a stud farm was established at the Masseria Tarsia Morisco in the countryside near Conversano. Here a few examples of this breed, brought back from abroad, are being raised and trained in collaboration with the Italian Academy of Equestrian Arts, located at the Masseria Francesca in Crispiano (TA), by Michele Caroli. Thanks to this centre created and managed in Conversano by the Minunni family, with many sacrifices but also much gratification, the "Lipizzani Conversano" association was founded. Its goals are to coalesce a passion for and a commitment to this royal animal in the Conversano area, with the historical, cultural and natural beauty that characterises the urban and suburban area. Starting in 2010, various sightseeing itineraries in horse-drawn carriages, accompanied by professional guides, will be offered in our urban and suburban areas.

Rural chapels
This itinerary proposes a carriage tour through the countryside of Conversano, with stops at a few rural chapels. A historical analysis of their placement in the urban context, focusing on the passage from the Middle Ages to the modern age, will be followed by guided tours of these religious buildings.
These chapels, all but two of which are deconsecrated, date back to the period between the 10th and 17th centuries A.D. Various private individuals built these chapels, in a sign of devotion typical of the Middle Ages, to be able to bring together the members of the community and carry out religious practices in honour of the saint to whom each chapel was dedicated. When the rural settlements were abandoned, following the expansion of Conversano's city centre, these chapels lost both their social and religious functions for the communities that gravitated around them. This phenomenon led to the destruction of some of these chapels, or the abandonment and resulting degradation of others. Only a few chapels have been renovated by private citizens or by public or religious agencies, making it possible for the people of Conversano to see them and attend religious services in them.

1. The longest itinerary lasts approximately 2 hours and 40 minutes and includes stops at six chapels located around the modern city centre.

2. There are two shorter itineraries which last approximately 1 hour and 40 minutes and include visits to three chapels each:

Dolinas
This itinerary proposes a carriage tour along the country roads around Conversano passing by the largest karstic lakes around the district. The tour includes stops at dolinas where it is possible to sample traditional foods typical to the Conversano area amidst the rocky landscape characteristic of the karstic area. The Conversano lakes have, since the Roman period, functioned as cisterns which supplied water to nearby towns. The fundamental epoch, and that which has been best documented historically, is the Middle Ages. At that time these karstic depressions served as supply basins for the nearby rural villages. An outstanding example is Lake Sassano, which takes its name from the "Villa Sessani" located on its shores during the medieval period. The unique habitat of the lakes is ideal for amphibians and reptiles; in particular, Italian newts, green toads and water snakes. Since 1985 the lakes of Conversano have been declared a natural herpetology preserve. The lakes are also a stopover site for various species of migratory birds such as ducks, geese, herons and flamingos. Recently, the European Union classified the lakes as Natural Habitats of Community Interest. The itinerary lasts approximately 2 ½ hours and includes stops at five lakes.

Marchione
Located about six kilometres from Conversano, the Marchione Castle was a hunting lodge belonging to the Acquaviva d'Aragona family, who were the Counts of Conversano. The origins of this noble family date back to Rinaldo Acquaviva, lord of Atri, who lived around the year 1,000. The Acquaviva d'Aragona counts customarily lived in their castle in Conversano and they used the Marchione estate for hunting. The grounds included 2,000 "tomoli," equivalent to 1,260 hectares, of oak woods and Mediterranean scrub. One oak tree from those woods remains standing today, it is estimated to be about 500 years old. Legend has it that an underground passage connects the Marchione castle to the castle in Conversano. Since 1993, the Marchione estate has also been used for receptions, meetings and conferences. The catering and service are carried out with attention to the smallest details directly, and exclusively, by the castle personnel.

Equipments
The carriage has four seats for adults, excluding the guide and the coachman, and one child's seat can be added. For larger groups it is also possible to organise tours with two carriages, each with four seats and the possibility to add a child's seat, for a total of 10 people, excluding the guide and the coachmen. All of the itineraries depart from the Masseria Tarsia Morisco, the centuries-old centre for breeding Lipizzani horses. At the masseria it is possible to taste typical Apulian culinary products before beginning the tour. Initially, the tours will be held exclusively on Saturdays and Sundays, two tours each morning and afternoon. As an alternative, a tour of Conversano's historical centre, the castle and churches is also available.

For information on itineraries and to make reservations:
email: direzione@cortealtavilla.it
phone: +39 (0)80 4959968 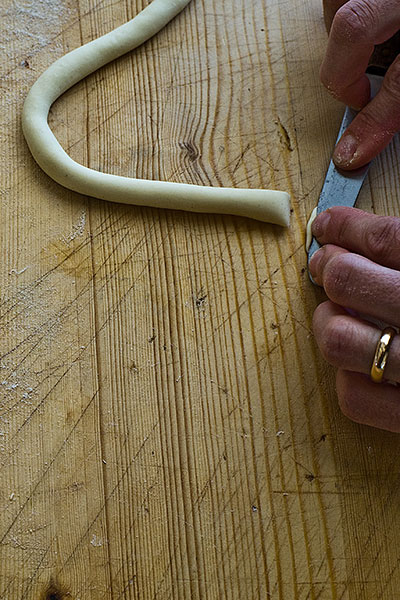 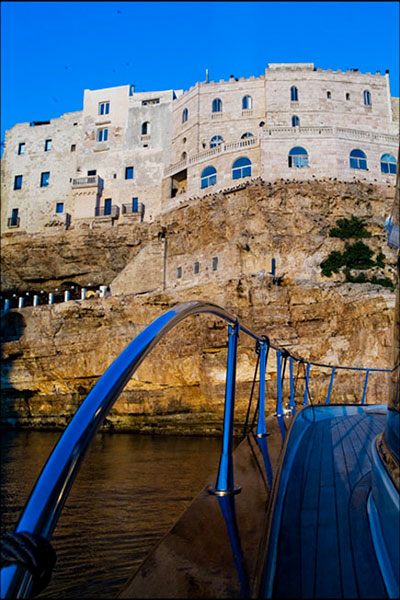 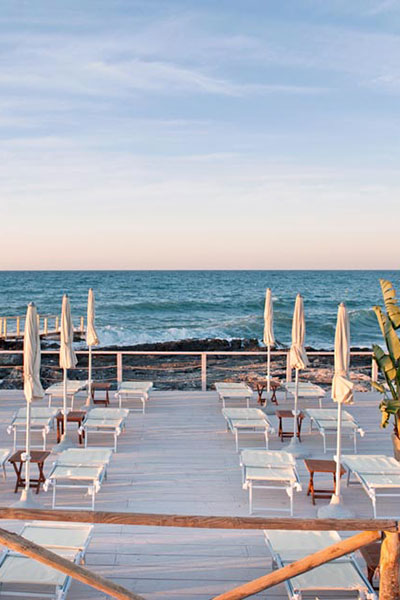 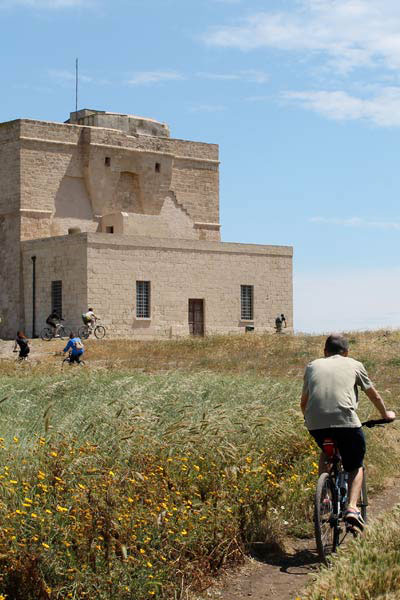